Providing Natural Healthcare solutions by ensuring overall Wellness of the Patients along with treating diseases.
Blog
Preventing the Inflammatory process of kidney disease through medicine originated from plant

The aim of this blog is to prevent kidney from the inflammatory conditions that can affect kidney functions. Inflammation plays a major role in worsening kidney disease. Inflammatory Changes in the kidney are not caused by medical condition but by the kidney themselves. This article focuses on the following three important themes:

THE EFFECTS OF INFLAMMATION ON KIDNEY

In order to understand how to reduce inflammation affecting kidneys, we need to first review what inflammation is and what stimulates the inflammatory response will involve in managing and reducing the associated inflammatory component. Inflammation is basically how the body normally responds to illness or disease. The body immediately makes cytokines that begins the healing process. Over a time, a scar made of strong fibre - type tissue to protect and minimize further injury to the site. What if the injury was inside the body which we could not see? What if the on-going scar formation going in the kidneys? What if the inflammatory response was never really turned off? How would such process get started? The answer to this question is oxidative stress. Oxidative stress refers to damage that is occurring inside the cells of kidney. It is this continued stress within the cells that stimulates and continue to spread the body’s inflammatory response. This continues disturbance to the cell may release too many free radicals. At this cellular domino effect happens, and cytokines or pro-inflammatory proteins, are produce these include endothelin, interleukins and transforming growth factor (TGF)-beta. TGF- beta is associated with scar-like tissue formation inside body called fibrosis. Fibrosis like scar is permanent and irreversible. TGF-beta is implicated in the worsening of diabetic nephropathy and CKD itself, all of which are state of chronic inflammatory changes in the body. Several other conditions, such as dyslipidaemia, hypertension and CKD itself, can similarly cause oxidative stress to the cells. Therefore, treating the underlying condition affecting the kidneys will ultimately preserve kidney function and decrease the level of inflammation. In CKD, inflammation can become a viscous, never –ending cycle. 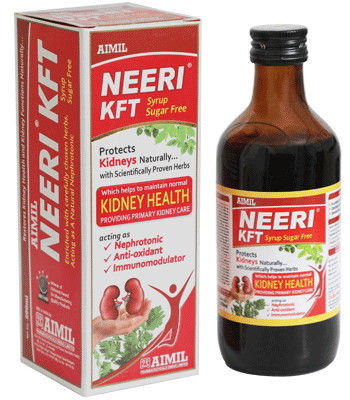 Boerhaavia diffusa on TGF-beta in the treatment and preventions of CKD. The aforementioned approach of the author is authenticated through a study conducted by A. Prathapan et.,al. published in British Journal of Nutrition (2013),  who tried to identify the potential of traditional medicine Boerhaavia diffusa  for its effects on oxidative stress and transcription factors such as transforming growth factor beta 1 (TGF-b1). Boerhaavia diffusa L. from the family Nyctaginaceae is an important indigenous medicinal plant widely used in Ayurveda. It is commonly known as Punarnava, has a long history of use by indigenous and tribal people and is used against kidney disorder in Indian traditional system of medicine. Boerhaavia diffusa has also been widely used for the treatment of dyspepsia, jaundice, enlargement of spleen, abdominal pain and fibrinolytic, and as an anti-stress agent. The plant possesses antioxidant potential, and experimental studies have demonstrated that Boerhaavia diffusa could be effective in the prevention and treatment of diseases in which oxidants or free radicals are implicated. The investigator proved the action through angiotensin II-induced hypertrophy in H9c2 cardiac myoblast cells via modulating oxidative stress and down-regulating transforming growth factor b1. It was observed in the study that the mRNA expressions of TGF-b1 in the angiotensin II-treated cells increases significantly with the control cells as compare to the treatment group where the expression of the TGF-b1 genes get reduced by Boerhaavia diffusa. Thereby the herb Boerhaavia diffusa is indicated for its beneficial effect in conditions like diabetic nephropathy, CKD and other inflammatory conditions.