Providing Natural Healthcare solutions by ensuring overall Wellness of the Patients along with treating diseases.
Ayurveda
The science which imparts knowledge of Ayus (life), provides longevity, contains relevant information and discusses all allied topics is known as ‘Ayurveda’.
Objects of Ayurveda
The healthy should remain full of health endowed with strength and vigour and well-protected from disorders and the stick should be treated for alleviation of diseases- these are the two objects of Ayurveda.
Purpose of Ayurveda
That man is fortunate who enjoys happy and wholesome life of one hundred years, acquires virtues, pleasures and wealth by his strong body and in the end, being free from ego and attachments follows the path of attains blissful liberation.
Health and disease
Svasthya (Health) is normalcy and equilibrium while vikara (disease) is abnormality and disequilibrium. ‘Arogya’ is the aspect of health denoting ‘absence of disorder’ or ‘alleviation of disease’.
Parts of Ayurveda
Initially Brahma delivered eight parts of Ayurveda as 1. Kayacikitsa (medicine) 2. Kaumarabhrtya (paediatrics including obstetrics and gynaecology). 3. Agadatantra (toxicology)
The five bhutas and their specific qualities
Ether (Akasha), air (Vayu), fire (agni), water (Jal) and earth (Prithvi) are the five bhutas having lightness, roughness, hotness, coldness and heaviness as specific qualities respectively.
Dosa, Dhatu and Mala
As per ayurveda, human body is basically composed of dosa, dhatu and mala and we must know about them. 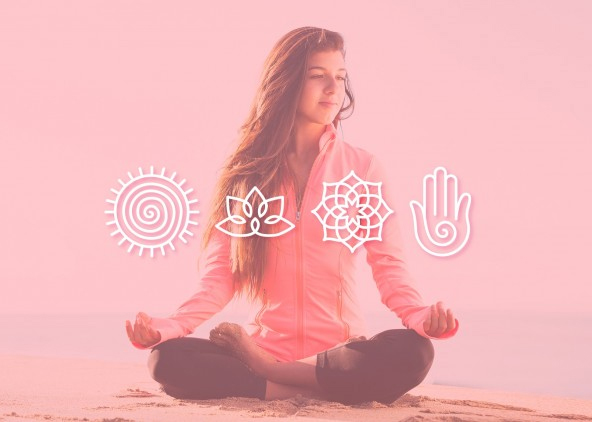 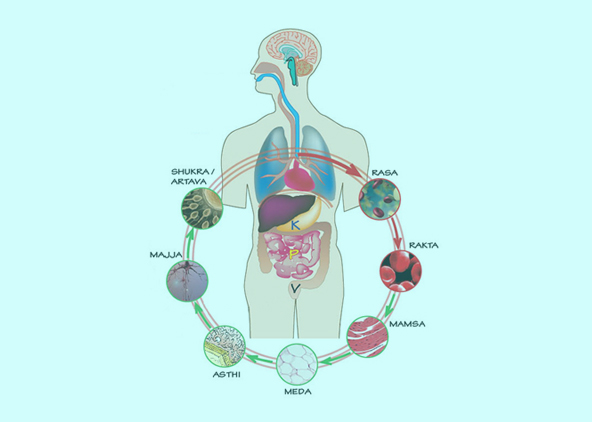 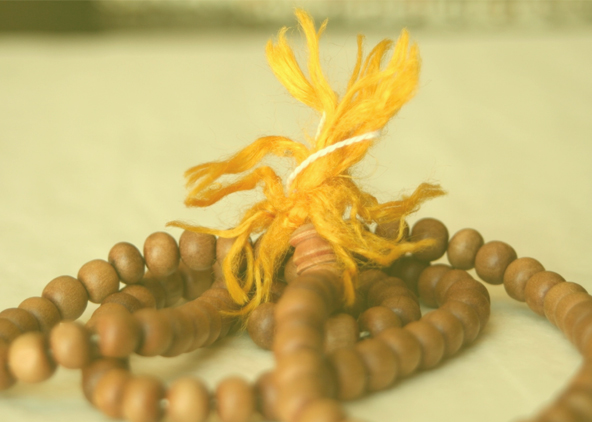 Mala Read More
Dosa
When prana (vitae) enters into the material body, the three dosas – vata, pitta and kapha – emerge to take up the physiological functions. Vata consists of air (and ether), pitta of fire and kapha of water (in combination with earth). They are called dhatu, dosa and mala because of their maintaining, pathogenic and excretory phases.

The three dosas (Kapha, Pitta and Vata) generally pervade the entire body and are particularly located in head, navel and the moon by their functions of movements, receiving and releasing, the body is maintained by three dosas (Vata, pitta and kapha) with the respective functions. Dosa is so-called as it defines Prakrti (human constitution) as well as produces abnormality thus playing vital role in physiology and pathology of living beings.

The three dosas, like three gunas (Sattva, rajas, and tamas) have characters contrary to each other so as to maintain the equilibrium similar to the miraculous rope-actors. Vata, Pitta and Kapha increase at the end, middle and beginning of age, day-night and eating respectively.
Qualities of dosas
In qualities, vata is non-unctuous, cold, light, subtle, moving (unstable), non-slimy and rough.
Pitta is slightly unctuous, hot, sharp, liquid, sour, pungent and moving.
Kapha is heavy, cold, sweet, unctuous, stable and slimy.
Dosas, when treated with drugs, having opposite qualities, get pacified. Thus the physician should keep these qualities, get pacified. Thus the physician should keep these qualities of dosas in mind and proceed accordingly in his duty.
Functions of dosas
Vata – the word ‘vata’ is derived from the verb-root ‘va’ meaning to move to inform to impel which are the natural actions of vata. Enthusiasm, respiration, movement, normal transportation of dhatus (nutrients), proper elimination of excreta – these are the normal functions of vata.
Pitta – the word ‘pitta’ is derived from the verb root ‘tapa’ meaning to heat, thus pitta is concerned with various physiological functions relating to agni (heat) digestion of food, body-heat, thirst and hunger, vision, lusture, cheerfulness and intellect – these are normal functions of pitta.
Slesman (Kapha) – the word ‘slesman’ is derived from the verb-root ‘silsa’ meaning ‘to embrace’ thus uniting, healing etc. are the basic functions of kapha. Unction, binding, to provide firmness, heaviness, virility and strength in the body, forbearance, patience and absence of greed are the normal functions of kapha.
Phases (gati) of dosas
Dosas pass through three phases – sthana (normal status) vrddhi (increase) and Ksaya (decrease). Increase is of two types - Sanoaya (accumulation) and prakopa (aggravation), the former is slight increase of dosa in its own site while the latter comprises of liquification combined with transgression.
Causes of aggravation of dosas
Vata – Vata is aggravated by intake of rough, bitter, astringent, and pungent substances, fasting, suppression of natural urges, physical exertion, excessive cold, wasting of dhatus, mental worry, keeping awake in night, in early rains, old age, last phase of day and night, and after the food is digested.

Kapha – Aggravated kapha gives rise to heaviness, diminution, of digestive fire, nausea, salivation, lassitude, horripilation, sweetness in body and mouth, itching in throat, drowsiness, excessive sleep, depression of body and mind, pallor or whiteness and abnormal growth.
Dhatu
Dhatus are those which maintain as well as nourish the body, they are seven – rasa (chyle), rakta (blood), mamsa (muscle), medas (fatty liver), asthi (bone), majja (marrow) and sukra (semen). The final essence of all these dhatus is known as ‘ojas’ which has characters like those of kapha and provides the power of immunity against disease. The rasa dhatu seated in heart is pumped by vyana vayu in body-channels and thus nourishes the other dhatus and organs as water flowing in channels irrigates the field. One dhatu nourishes the other successive one and in this way they constantly undergo transformation and thus the last dhatu, is produced in a month. Sukra is unmanifest in childhood, is dried up in old age and is fully manifest and active like a blooming flower in youthful age.
Mala
Urine, faeces, sweat etc. are malas (excreta) formed from the ingested food. They are devoid of essence, are collected in their sites and thrown out by their respective passages. Malas are also formed dhatus as the gross product while the finer portion of them leads to the formation successive dhatus.
Agni
Agni is the invariable agent in the process of Paka (digestion, transformation). They are thirteen in number – Jatharagni (gastric fire) one, bhutagni five and dhatvagni seven of them the gastric fire known as Vaisvanara (present in all living beings) is the most important one which digests the four types of food and transforms it into rasa and mala. The five bhutagnis act upon the respective dhatus by which each dhatu is broken in three parts – the gross part becomes as mala, the fine part stays as itself and the finer one goes on in formation of the successive dhatu. In this way, the entire process of transformation consists of two types of products – Prasada (essence) and Kitta (excrete). The former is taken in for nourishment while the latter one is thrown out and defiles the body if stays longer.
Srotas
The channels in the form of tracts, veins, arteries etc. are known as srotas which are also called ‘Kha’ (akasa = empty space). The carry and transport four types of food, dhatus, dosas and malas. Dhatu sustains the body and nourished the successive dhatu only when digested fully by its agni and transported properly through its channel. Thus srotas play important role in dhatupaka (metabolism).

In this way, the living body swinging in the duality of mala and prasada grows like a grass on the earth and finally perishes therein.
Prakrti (Constitution)
The constitution of a person is decided by the dosa predominant the combination of sperm and ovum (fertilization) which becomes almost fixed for the whole life.

The person of pittaka constitution is intelligent, powerful, debating and has quick emotions of anger and compassion. He eats much, dislikes heat and perspires heavily.

Constitution is also decided on the basis of psychic qulaities – sattva, rajas and tamas.

The person of sattvika nature is pure and has positive outlook, is devoted to gods and teachers, happy, intelligent, critical, studious and adopts middle course.

The person of rajas nature is brave, has attachment and aversion, anger, passion, intolerance, greed, selfishness and is involved in enjoyments and violence.

The person of tamasa nature is foolish, dull, fearful, averse to cleanliness, quarrelsome, dislikes good people, sleeps too much and eats stale food.

Similarly, there are also bhutaprakrtis (constitution according to predominance of bhutas) which can be known from their respective features. To know a person, one should examine his constitution properly.

The man should fix his routine accordingly to his constitution. Similarly, the physician should keep the constitution in mind while prescribing medicines (and diet) for a patient.
Ayurveda History
Ayurveda or the veda of ayus (science of life) is the medicine of India coming down traditionally from the earliest times. Caraka says that it was revealed by Brahma, the creator, himself while susruta goes on step further by stating that it was delivered even before creation. Generally ayurevda is recogized as an upaveda related to either Rgveda or atharvaveda. Kasyapa takes it as the fifth veda and gives it the topmost position among them. All this proves its existence since antiquity as Caraka explicitly says it sasvata (eternal) with untraceable beginning.
Panca Mahabhuta
Purusa (person – the living being), in Ayurveda, is regarded as composed of six components – five mahabhutas – five mahabhutas (matter) and self (spirit). The gross human body along with its different organs and parts, the sense organs and the sense objects are all composed of five mahabhutas, eg. Akasa, vayu, agni, ap and prthivi.
Theory of Tridosa
Though pancamhabhutas prepare the frame, they cannot as such take up the functions of life. For this, as soon as life enters into the body three vital principles emerge which regulate and control the biological functions. They are known as vata, pitta and salesman (Kapha). In fact, they are the subtle forms of the three bhutas- Vayu, agni (tejas) and ap – respectively.
Principles of therapeutics
The basic approach of Ayurveda towards treatment of diseases is to assist the nature which is already doing the best possible for it. Ayurveda believes in nature-cure, e.g. In the event of illness nature itself take promote action to alleviate disorder and to restore heath, the role of physician is only to assist it so that the recovery takes place smoothly and shortly.
Nutrition and dietetics
There is a quadruple in the carakasamhita which deals with its topic extensively. While prescribing a diet one has to keep in mind not only its nutritive value but also its effect on dosas and digestibility. Quantity of food is also important wholly and component wise for which the terms ’sarvagraha’ and ‘parigraha’ are used.
Concept of health & disease in Ayurveda
Equilibrium of psycho-somatic elements is health and dis-equilibrium is diseases (vikriti). Health is also termed as svasthya which denotes the state of staying in ‘sva’ (self normacy). Here ‘sva’ covers a wide range of psychosomatic well-being of the person. Susruta has included atman also in the definition of health thus according to him the concept of health is three dimensional in comprehensive way while for practical purposes it is two dimensional e.g. psyco-somtic.
Pharmacological concepts
As in modern age chemistry is the basis of drug composition, panca-mahabhuta is its counterpart in Ayurveda for composition of dravya (drug). Thus, according to ayurvdea, every drug is pancabhautika and as material substances are composed of panca-mahabhutas they can be used as drugs with definite purpose and method. Drug has got some qualities and actions.
Pathogenesis
As said earlier, disequilibrium of dosa is the genesis of diseases. The aggravated dosa circulates in the body, reaches and strays at the point of obstruction in channels affecting the tissue therein which is termed as dusya (affected tissue). The involved organ is known as adhisthana (site). Thus the combination of dosa and dusya produces disorder (vyadhi).