Native Gandhak occurs in the craters and crevices of extinct volcanoes where it has been deposited as a direct sublimation product from volcanic gases. It also occurs around thermal springs, in salt dome cap-rocks and in sedimentary sequences that contain sulphates along with organic materials like bituminous limestone. Gandhak is frequently associated with gypsum and limestone. Native Gandhak, which is contaminated with sand or clay, bitumen and such foreign matter, is purified by melting in oven or by distilling in closed vessels. In India, the deposits of Gandhak are very much limited. The only known occurrence is that of Tsokar Lake, Leh district in Jammu and Kashmir. There is no mining for Gandhak in India. Elemental Gandhak, however, is recovered commercially as a by-product from fertilizer plants at Panipat in Haryana, Naya Nangal and Bhatinda in Punjab and Oil Refinery at Mathura in Uttar Pradesh. There are huge deposits of elemental Gandhak burried underground in certain parts of the world especially Poland, Mexico and USA.

Shall not be used in formulations without subjecting it to śodhana. Śodhana: [ Ref: Rasām¨tam-2/3] i) Gandhak : 1 part ii) Go-dugdha or Bhrngarāja rasa (Pl.) : Q.S Method: Take fine powder of Gandhaka in a ladle, add little amount of ghrta, melt and pour in to the vessel which contains go-dugdha or bhrngarāja svarasa. Collect on cooling to room temperature, wash with plenty of luke warm water, dry, prepare the fine powder and preserve for further purpose. 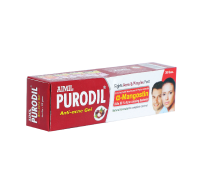